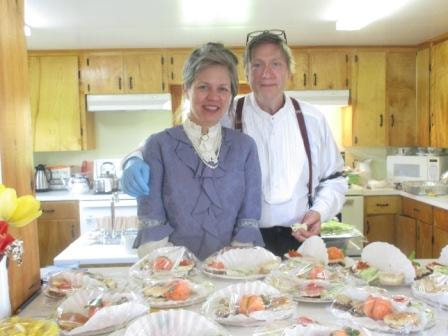 2018 Victorian Tea & History
Since the early 1800s there has been a community gathering space for residents of Granville Road. Early records indicate that folks met in a “dark room over the school” until after World War I, when residents constructed our current building, which was located near the future site of The reconstructed Habitation in Port Royal. In the 1920s and 30s, plays were produced and debuted in the spring, along with productions from other halls. Variety shows and other entertainments were presented in the summer months. In the fall, school fairs were held with daytime exhibits and evening speeches, demonstrations, and chorus recitals. There were dances and famous Granville clam suppers, and the Hall served as the headquarters for the Sons of Temperance. The Hall was a vibrant part of the community and enjoyed by all ages. By the 1950s, the Canadian Order of Foresters utilized the second floor (since removed), and maintained the entire building.

In the 1960s, Parks Canada sought to expand the campus of The Habitation historic site, so the Hall was moved to its current location on the north side of Granville Road. At that time washrooms and a kitchen were added to the building. The Hall continued to serve as a community gathering place, and maintenance fell into the hands of a cadre of resident volunteers. In recent decades the Hall has been known for lobster suppers and dances, as well as a spot for private parties and receptions.

In the past handful of years, the demographic of Granville Road has swung to retirees, small farmers, and families with young children. Regular groups meeting at the Hall have included a women’s Coffee Club, Habitation Hookers & Crafters, as well as birding groups and a book exchange. These programs are held during the day and provide opportunities for seniors to socialize.

2018 saw the addition of two groups dedicated to small farmers and food growers. The Good Cheer Garden Group and Flocksters & Herders held monthly meetings and look forward to adding community markets in 2019, as well as workshops and seminars. A Women’s Clothing Exchange was held to foster inter-generational fellowship and to promote clothing repurpose/reuse. This event was well received and will be repeated annually. Local men utilized the Hall for an informal get-together one evening a week. The Good Cheer Men’s Group attracted home brewers and those desirous of a connection with their neighbours. A standout fundraiser was held on Victoria Day weekend. Costumed servers provided tea and refreshments, and historian Barry Moody gave a talk on life in Victorian-era Annapolis County.  The Victorian Tea & History attracted local residents and visitors from as far away as Ontario and PEI. We’ve gotten great feedback from these new offerings and enjoyed lots of community support, including the loan of costumes from the Heritage Society of Annapolis Royal and marketing assistance from Parks Canada employees at neighbouring Habitation.


2019 events included a community potluck, community market day, a rug hooking exhibition and tea, a Thai dinner with team trivia, chair yoga,  Portrait Club, and a travel series by Hall volunteer Betty Wright. The Good Cheer Garden Group and Flocksters & Herders combined to form the Good Cheer Self-Sufficiency Society and held monthly programs for small farmers and homesteaders. Several grants were awarded including a CFIP grant from the NS government to remedy problems with the foundation and address drainage issues, a Parker Mountain Wind Turbine Association grant for ceiling fans, a grant from Annapolis County for new lighting, and an ACCESSIBILITY grant to help purchase acoustic panels. A large New Horizons for Seniors grant was awarded for attic insulation, a heat pump, and a new metal roof. With the building well insulated and this more efficient heating source, the Hall is now open all year.

2020 - 2021 was a very challenging period for Hall activities due to the COVID-19 pandemic. But the volunteer board worked behind the scenes to continue to make improvements and upgrades and hold fundraisers. Internet access was installed in 2021, as well as a parking lot bulletin board, and shutters and a door to the kitchen. The Good Cheer Self-Sufficiency Society saw its attendance rise to full capacity, highlights including a talk o Greenhouse Growing by Ian Curry and Niki Clark, a Mushroom Walk & Workshop, and a Solar Symposium. Three fundraisers were held, including the now popular Holiday Tourtiere Takeaway led by Michael Rouse. Weekly yoga classes started in November 2021, as well as the new Port Royal Literary Circle, a group for folks interested in the study of great literature. At the close of the year, Kari Rouse developed a Facebook page for the Hall with a goal of creating a connected and vibrant community forum for Granville Road residents. 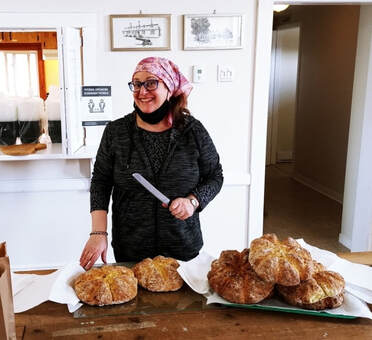 Elaine Bergen serves up Irish Soda Bread March 2022
The Hall celebrated its 100th Anniversary in April 2022. In May of that year, the community came together for a Visioning Event: Lower Granville Hall, the Next 100 Years. Input from that event and surveys taken throughout the previous year have set the course for the Hall in years ahead. Wisdom sharing events around growing, harvesting, preserving, and cooking food was high on the list of interests. Three community fundraisers, featuring fabulous fresh local foods, were held: a St. Patty's Takeaway; July Dinner Theatre with the premiere of Simon Bonnington's "The Rhubarb Stalks at Twilight"; and the 3rd Annual Holiday Tourtiere Takeaway. 2022 came to a close with the announcement of a grant award from the province to fund a generator. This grant will enable the Hall to function as a Comfort Station in times of crisis. The future is bright in Port Royal.